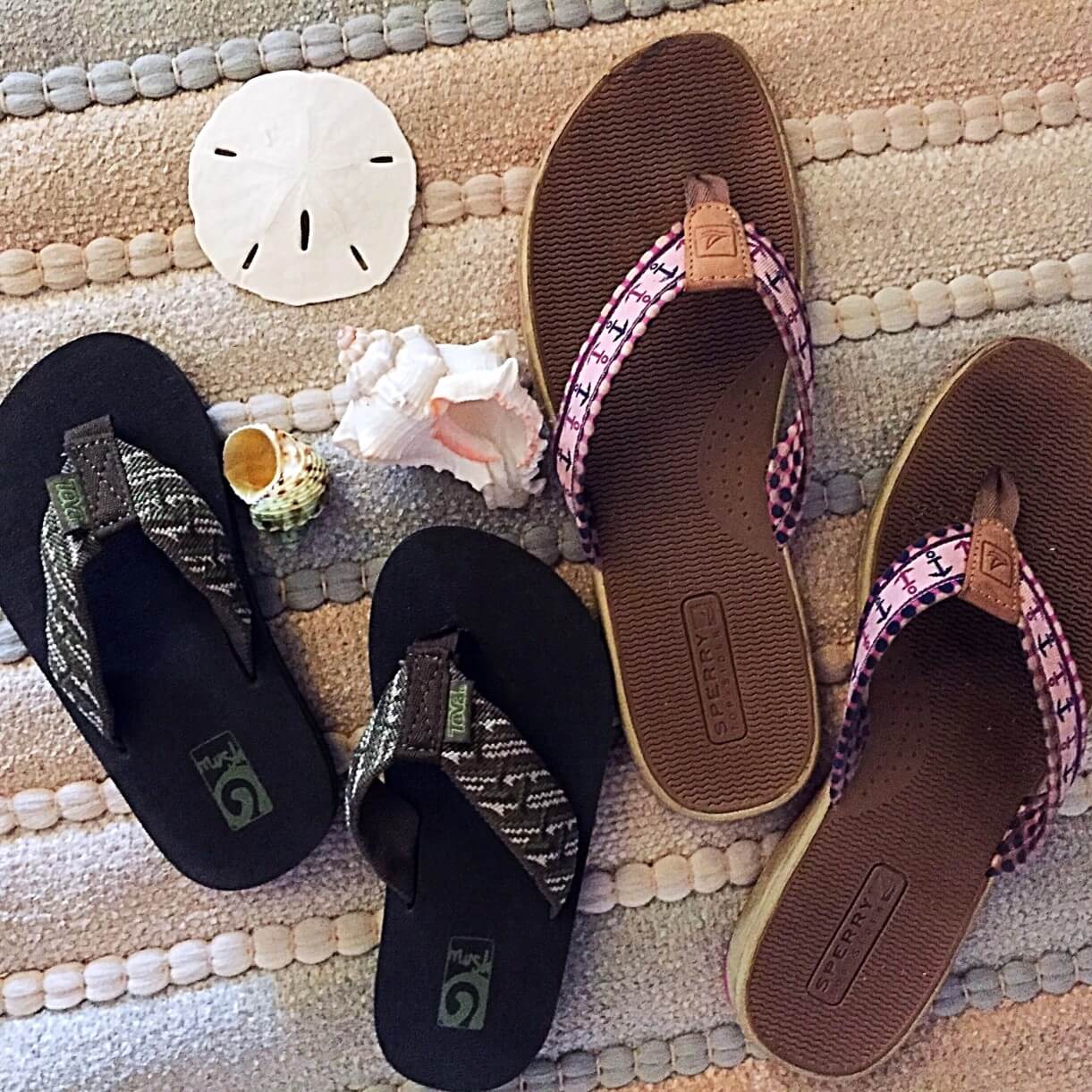 As the saying goes, “everything old is new again”, and in the world of fashion, that is most certainly the truth. Over the years, we have seen so many fashion trends of bygone eras rise to the surface of popularity again, and Tevas (yes, those Tevas), are a prime example. These sandals were at the height of popularity back in the 1980s and ‘90s. In fact, you weren’t a part of the ”cool kids” club unless you had a pair of Tevas; okay, we may be elaborating on that part, but they were super-popular back in the day.

As fashion trends go, however, Tevas fell out of fashion almost as quickly as they became en vogue, and they were all but dead and gone; a mere memory you’d spot in a picture, you’d catch a glimpse of in a classic flick or TV show, or maybe even collecting dust bunnies in the corner of a closet somewhere. Fast forward some 30 years, and guess what? They’re baaack! That’s right, Tevas sandals are back in a big way, and they’re just as cool as they were in their hay day.

Colorful, durable, versatile, simplistic, durable, and pretty affordably priced, it’s easy to see why Tevas have become all the rage again. If you’re middle-aged, it’s kind of neat seeing kids and teens wearing them again, and if you’re a kid or a teen, it’s kind of cool seeing them wear the same iconic fashions that your mom and dad probably wore (even if you don’t want to admit it). No matter your age, if you’re sporting a pair of Teva sandals in 2021, even though they’ve been around for decades, you’ll be on the cutting-edge of fashion.

Whether you’re an adult who is looking to relive their youth by wearing the shoes that you loved when you were younger, or you’re a teen who wants to sport the latest trend, you should definitely consider getting yourself a pair of Tevas. Before you do, however, you might have a few questions about this popular footwear brand, and one of the questions at the top of your list may be, “Are Tevas waterproof?”

To find out if these resurrected sandals will be able to withstand moisture, keep on reading. 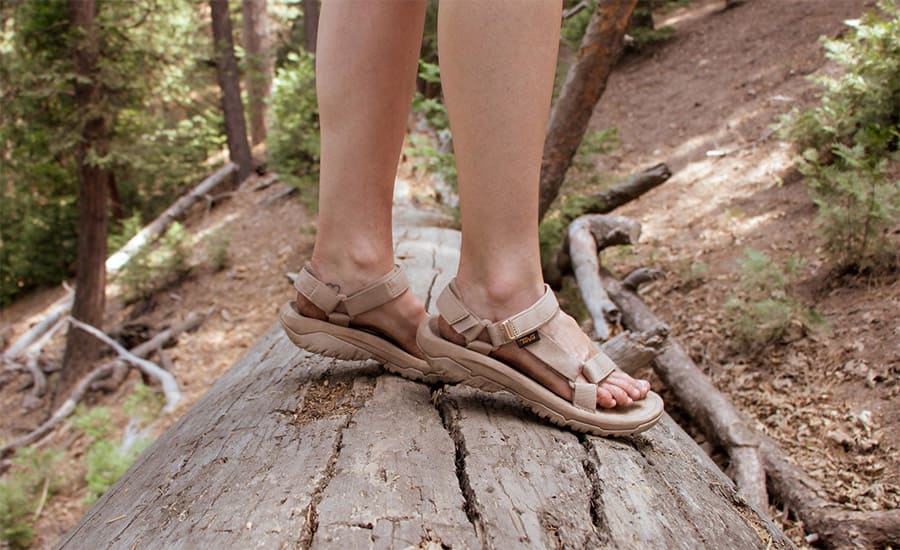 The History of Tevas

Teva (the Hebrew word for “nature”), was the brainchild of March Thatcher, a geophysicist and a rafting guide. In 1982, while he was gearing up for rafting expeditions, Thatcher discovered that he couldn’t find shoes that were suitable for activities on the river. If he wore sneakers, they were bound to get soaked, and wet sneakers are super-heavy and incredibly uncomfortable; plus, they take forever to dry. Flip flops would be a better choice, as water runs right off of them, they don’t get heavy, and they dry out almost as soon as they get wet; however, they would slip right off his feet while traversing the waves on the river, or when putting his feet into the water to load and unload.

Instead of settling and just accepting inappropriate footwear, Thatcher decided to put his ingenuity to work and crafted a unique style of shoes that he could safely wear while rafting. Shoes that would protect the bottoms of his feet, that wouldn’t get water-logged, and that he wouldn’t have to worry about slipping off and losing. His solution was to add nylon ankle straps onto a traditional thong sandal, and thus, the first-ever sports sandal was born.

Thatcher’s revolutionary ideas were so effective that he decided to patent the design and he signed a contract with an American shoemaker, California Pacific, to manufacture his clever sports sandals. He did the marketing for the shoes himself, dubbing them “amphibious utility sandals”, and in the first year of production, he successfully sold 200 pairs (an impressive feat for a geophysicist and river guide who had absolutely no background in designing shoes and simply invented them out of necessity).

While the original design did prove to be very effective for water sports activities, but not so much for activities that were performed on dry land. Remember, the first design was modeled after a traditional thong-style sandal that featured the addition of a nylon ankle strap, and as such, there were a lot of complaints about blisters forming between the first and second toes. Despite the complaint, it didn’t hold Tevas back, because in 1984, there was a surge in demand for the sandals, as tons of Americans (mainly young adults and teens) found the style to be unique and fashionable. California Pacific, the manufacturer, claimed the patent and the Teva name, claiming that Thatcher was one of their employees. As you can imagine, Thatcher was heated, decided to take legal action, and won the suit he filed against California Pacific.

With the rights to the name and the patent back in the rightful owners hands, Thatcher decided to move his operations from California, and set up shop for his hugely popular sports sandal brand in Flagstaff, Arizona. A year later, in 1985, Thatcher established a licensing agreement with Deckers Corporation for the company to manufacture and distribute the sandals exclusively. The design of the sandals was upgraded with the Universal Strapping System that Teva made famous. The first style to feature this new strapping system was called the “Hurricane”, and the rest is history. 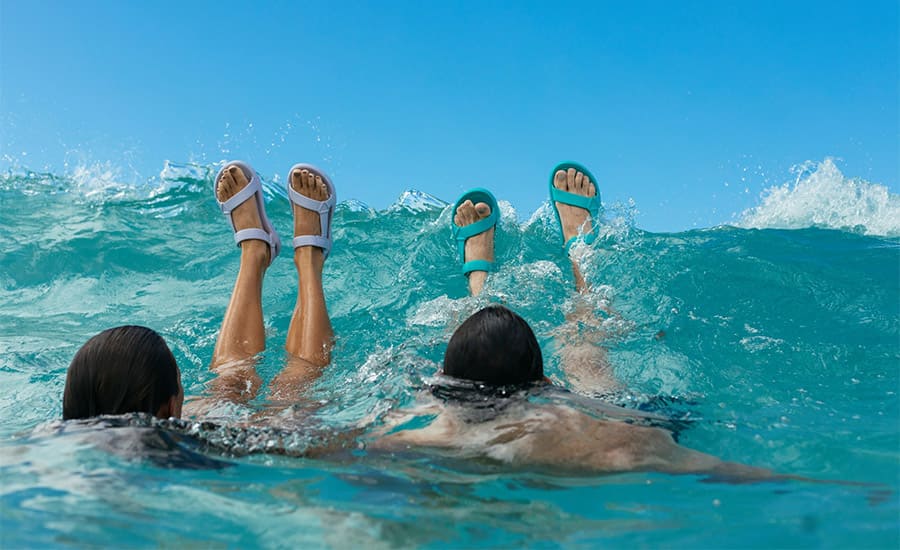 Now that we made a short story long and you know how Tevas got their start, let’s get back to the original question: Are Teva sandals waterproof?

The short answer is this: kind of. What does that mean? Well, while the soles of the sandals are waterproof, the straps may or may not be. Furthermore, because they are sandals, they feature an open-design that exposes the feet to the elements (obviously). As such, when your feet are exposed to water while wearing Teva sandals, they’re going to get wet.